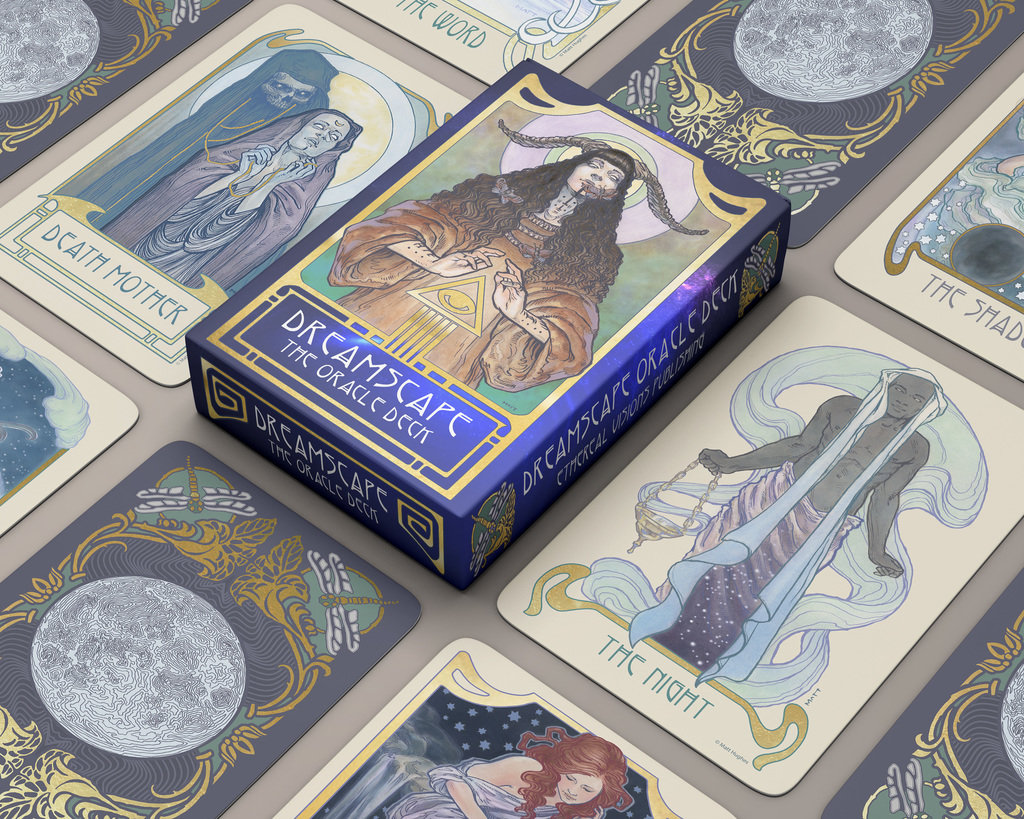 Dreams are natural portals into another realm of consciousness where we see the unseen and comprehend the incomprehensible. We are not alone in this other world; we have guides that aid us with understanding visions that are unveiled to us during Dreamtime. The Dreamscape Oracle cards visualize those who walk in dreams and guides you to interpret the messages given. The Ethereal Visions: Dreamscape Oracle Deck consists of 32 cards. Each card is illuminated with gold foil stamping unique to that specific card design. The cards are high quality 3" x 5 " cards on 350GSM stock with rounded corners. The decks come in a two-piece heavy box. The decks come with an expanded booklet describing the symbolism in each card and its use in a reading. This is the 1st printing of this deck.

Latest Updates from Our Project:

The rumors are true - next Tuesday, February 23rd, we will be launching our first campaign of 2021 - The LUNA Tarot! This highly diverse, 80 card deck is the result of months of work by Matt revisiting his Ethereal Visions Tarot Deck (which just reached 100,000 decks sold).

When Matt first approached the Ethereal Visions Tarot project in 2016, the intent was to stay true to the traditional Art Nouveau style of the early 1900s. Over the past few years, the deck has gained world-wide attention touching so many lives. Many of the deck admirers have reached out to Matt requesting a second deck with more diversity. This spawned the Dreamscape Oracle Deck. This oracle deck allowed Matt to explore that same original Art Nouveau style but with more diversity and creativity.

Because of your overwhelming response to the Dreamscape Oracle Deck, Matt immediately began thinking of ways to update the Ethereal Visions Tarot Deck so that the two could be used together. That creative spark has yielded The LUNA Tarot Deck, a revisited version of the Ethereal Visions Tarot Deck with more diversity, richer colors, special rainbow silver foil, and 8-10 brand new cards!

As you can see from the images here, it is going to be a beauty!!

The LUNA Tarot will be a limited edition deck. On launch day, we will be offering special Early Bird pricing, so be sure to support the Kickstarter within the first 24 hours.

The Dreamscape Oracle Deck has arrived! For the past few days we have been working feverishly to ship out these wonderful oracle decks to all backers. At this point we are about 70% complete and hope to have all decks out before the end of December. We have over 900 orders to fulfill by hand so please be patient as we sort through all of the orders. A tracking number from BackerKit will be emailed to you once the order is fulfilled.


Why does my tracking say "Pre-Shipment"?

With our fulfillment of Dracula Illuminated Edition last month we noticed a trend with the USPS of hold packages as they encountered internal "bottle-necking" due to their limited staff. These orders are listed as "Pre-shipment Shipping Label Created, USPS Awaiting Item". Please be assured that if your package has this listing it is in the hands of the USPS system and will be delivered. This status will not change until they physically scan the label at their facility. We wish we had more control over this but given the time of year and the recent cuts within USPS it is inevitable.


Thank you for all of your support with this project! Please keep an eye out for our next campaign launching in February - Ethereal Visions Tarot Deck - The Luna Edition

We hope everyone is safe and well!

We just wanted to send a quick note to everyone regarding the delivery of the Dreamscape Oracle Deck. As of today (Nov 27, 2020), the shipment from the printer is still being held at the international port for inspection. The printer assures us that they are doing everything they can to expedite the delivery and are hoping to hear something from their port agent by early next week. As soon as we have the decks in hand we will work as fast as possible to ship out all 900 orders (Kickstarter backers will be wave one). Although the original delivery date was March 2021, we are still hopefully of an early delivery on this project!

We are so excited to share with you that we were able to fast track this project! The printer confirmed that final decks are shipping out to us any day now and are expected to arrive in November. Once these decks arrive, we will focus our efforts on delivering to all backers as soon as possible in the hopes that everyone will be able to enjoy a nice holiday surprise before 2020 comes to a close (finally). Given that November and December are the busiest times for mail services, we hope to have these decks to you by December at the latest (fingers crossed).

As with any printed project, we were able to acquire ten advance copies of the deck from the printer for review. Usually, these are sent to publications for review resulting in the printed material hitting the market simultaneously as the items shipping to the public (publications take about two months to hit stands). But in this media age, those reviews can now be enjoyed immediately by the public (which dramatically helps with pre-orders for small publishers such as us). Some of you may have already seen these reviews popping up on Instagram and YouTube. It is a privilege for us to have such positive reviews from these public figures. With all the reviews, there is a common theme - WOW, we love this deck! As a small publisher, you really can't ask for a better response! Below is our most recent review on YouTube by Lisa Papez.

We hope this update finds everyone healthy and safe. We are working hard to bring you the best project possible and greatly appreciate all of your support and positive comments!

Decks are being printed right now

For months now, Matt has been working non-stop on the completion of this deck, and we are so happy to announce that the final deck is four months ahead of schedule!

Below are just a few shots of the printer proofs we received just this week. As you can see, we have even upgraded the foil to a custom foil carried by our new printer! We hope to deliver the decks late this year or January 2021 (original estimated delivery was March 2021).